OCTOBER. There is something different about this month. Its the turning of the leaves. The cool air beginning to blow. And a month in which you truly, can be Lost In Sports. It is a month that is filled with all four major sports leagues--NFL, MLB, NBA & NHL.
Baseball brought the end of the regular season with an amazing run by the Twins to the AL Central title. The MLB Playoffs have been sooo unexciting, the best part has been watching Jeter's heady baseball skills. 3 sweeps in the Division Series, and looks like a sweep for the Yankers, and a quick 5 game set for the Phils.


The only part worse about these playoffs has been Baseball's inability to capture their audience. Seriously. 3 days off for the NLCS, and 5 for the ALCS to begin. These breaks make it more about the "impact players" on a team, and not the team as a whole. Baseball misses the point, once again. And if it can't fall further, a possible 6 days off between the LCS and World Series if they end in 4 and 5 games like I mentioned before.
With October, we also see the return of NBA Basketball and NHL Hockey. These indoor, winter sports, are nothing short of exciting from the puck drop to the tip-off. Each fan likes their favorite sport for whatever reason, and basketball gets a bad rap for those I cannot understand. 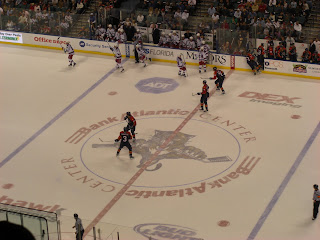 NBA teams are comprised of a max of 15 players, and only 12 active on any given game day. Understand, that rarely do teams even use more than 9 players, unless otherwise dictated. That makes you have to be 1 of 270 people in the ENTIRE WORLD, to even set foot on the court, let alone make and impact on a NBA game.


I don't try to talk about hockey, but plenty of my buddies CAN, AND WILL. From time to time, I will have a guest hockey blogger, most likely to be Walter or the Jets Fan.


Finally, October is about not losing the chance to make the playoffs or stumbling through the early-middle part of your schedule. The Miami Dolphins have rallied back from an 0-3 hole, and are now 2-3, more importantly 2-0 in the AFC East. For the Gators fans, a tough win yesterday vs. Arkansas, but the first BCS rankings have UF 1st by .030 over Alabama.


Peace, for now until later.

Predictions made in my MLB Season Preview
NL- Los Angeles Dodgers, Chicago Cubs, New York Mets, Wild Card-Florida Marlins
AL- Boston Red Sox, Minnesota Twins, Oakland Athletics, Wild Card- New York Yankees
World Series Winner- Chicago Cubs
SOOOOOOOOO WRONG IN MORE WAYS THAN ONE. What the hell was I thinking about the A's making it, and I should've known with the Cubs.
So that makes it 1/4 in the NL and depending on if the Twins win today's play-in game i could get 3/4 in the AL. It just seems like the Twins are gonna make it after everything going on with them--Last year @ Metrodome, Mauer misses beginning of season (hits .364), Morneau injured near season's end, etc.
Should I even attempt predicting the NL? Dodgers, Phillies, Rockies, & Cardinals. Real quick Dodgers limp into playoffs and have to face the best player (Pujols). I like the Cardinals winning the NL, for 4 reasons--Albert, Carpenter, Wainwright, & La Russa. The other series Phillies-Rockies is a matchup of flawed clubs in my opinion. Phillies cannot closes games out and the Rockies don't have any #1 pitcher (Cook, Marquiz, Jiminez just a bunch of #2 guys).
In the AL, you got Red Sox-Angels and Yankers-Twins/Tigers. Easy, Yankees take it because the play-in game ruins you. For the other matchup my gut says Sox, but it seems like an Angels year. So in the end Angels-Yankees and the Yankees take the cake.
World Series winner-- CARDINALS. Best combo of hitting, pitching, and managing in the bigs.
Posted by Aaron Alamary at 9:38 AM 0 comments