It's a Team Game

Which sport in the most team intensive? Well, it kind of depends on who you ask, and what team intensive really means. Camaraderie\Chemistry\Confidence are all unquantifiable. The point of my idea is in regards to how one player affects his teammates on a given play.

My list goes like this…Football, Hockey, Basketball, & finally Baseball. I limited my discussion to the four major sports, but others garnering respect include soccer, rugby, and water polo.

From my many discussions on this topic, we come to realize that there is no doubt that Football has the most team-oriented gameplay. For instance, the right guard must block a defensive tackle. Depending on who wins that individual battle affects the Linebackers, Running Backs, and ultimately Quarterback (which trickles out to the skill positions). That single Right Guard-Defensive Tackle matchup can turn a play into a 5 yard loss or a Touchdown!

Many argue that baseball is the most individual sport. Meaning what the Shortstop, let’s say Hanley Ramirez, will do at any given game (on the field or at-bat) will happen, REGARDLESS of what ANY teammate at ANY position does on that same day. Now this goes without saying that players perform differently given a different set of circumstances. But, I attest that Hanley Ramirez is trying to get a hit, or make an out, no matter what is happening on the bases.

A pitcher can have an all-time historical game and most likely with the help of his defense playing behind him. The difference is individual players affecting the outcome of a given single play, in comparison to the other players around him. A fielder in baseball is making his play off of the batter (regardless of the other fielders), which depends on what the pitcher does (not the other fielders). So, this notion that baseball is a “team oriented-game” is entirely off to me. It is a collection of individual game performances masquerading as a team. And yes I do know that a guy on 1st base does influence who is at-bat, but Hanley is still trying to get a hit if 1st is occupied or empty. And yes I know a guy on 1st base does influence the pitcher, but Pitcher X is trying to make an out is 1st is occupied or empty.

Baseball plays by a different set of rules because there are so many stoppages of play. Just think about a single at-bat for a moment…Have you ever seen Bobby Abreu? Half the time he just tries to foul off pitches to make the Pitcher work harder. And that is just one of the reasons why baseball is the most individual game. To me, this does not take away from the sport, it only makes it more interesting to those who love it, LIKE ME!

So, what do you think? Which sport is the most team-intense based on the criteria I have used?

Peace, for now until later.

It's been a long time, I shouldn't have left you...

Back by nothing less than popular demand!
So what has happened since last time?
Graduation from UF, moving to South Florida, vacation to Nation's Capital, and the Miami Heat lost to the Charlotte Bobcats by an embarrassing 39 points.
I drive more in a day down in South Florida than I would in a week in Gainesville, gas adds up like none other.
I saw the Heat-Celtics game on Jan 6, that should have been a signature win, but Mario Chalmers and Jermaine O'Neal decided otherwise. 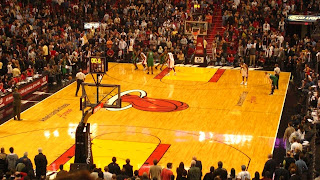 I've seen Sidney Crosby score a goal, and the Florida Panthers hold onto a playoff spot just long enough to be the 11th seed, but TWO points out of sixth.
Stay tuned, upcoming post on which sport is really the most team-intensive.
Peace, for now until later
- Aaron
Posted by Aaron Alamary at 12:22 PM 0 comments