I will be traveling to the Northeast today, departing from Gainesville. I have a questionable infatuation with this area of the United States, most likely due to the awesome history of the region. My travels will lead me to Boston by way of bus from New York City, 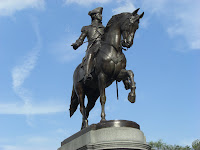 spending 3 nights in each hub of American culture new and old. Right now, I'm waiting to board mini plane. I've never flown on a small jet like I'm about to...it's something crazy like 15 rows os seats, should be an experience.
OK. So I have been back in Gainesville since early Tuesday morning and it has taken until now to come up with the criteria to weigh these two cities against each other. Food, Nightlife, Public Transportation, the People, and finally the sports.
Depending on what you are looking for, each city has its own benefit. But, for my personal liking NYC is where its at. The sheer volume of choices on every block is astronomical, and not only the choices but availabilty of late night food. I did have amazing Italian food in the North End of Boston, so that is definitely worth mentioning.
By far, the people in Boston are waaaaaaay more friendly. I walked the streets of both cities by myself and in NYC the most you get is a head nod from a passerby. Bostonians spoke and even responded when I returned the how you doin' question. It may be the amount of young people that live in Boston, which is refreshing to see when riding the trains. Everyone in NYC is just always in a rush.
As for public transportation NYC domination. The subway system is set immaculate. Everywhere is accessible with a minimal amount of walking to and from each subway stop. The only issue is the cleanliness of the subway cars, but the short wait periods are great. In Boston the main way of moving through the city is by way of the T-Train. This has 4 branches which connect and all lead to the same ending point. The problem is a small amount of cars for each train, long waits, and decently far walks. Although Boston's cars are far cleaner, newer, and more comfortable.
Nightlife doesn't even compare. Bars and clubs close at 2 am in Boston, which blows, it's like being back in Gainesville. The thing is I don't like staying out so late, but that's where the late night food comes into play. In NYC, there is no time to close, just a time to when alcohol is stopped being served.
And now for the sports. Recently speaking, Boston is #1 in the USA, not even just between these two cities. All-time its pretty much up in the air. It really depends on what sport you are talking and even then what era.
Here's the pictures from my showdown.
So, in the end it happens to be a personal choice. The life in Boston is much more quiet and slow-paced. New York is the city that never sleeps and is another world in and of itself. Personally, I choose NYC.
- Aaron
Posted by Aaron Alamary at 10:19 AM 0 comments

As Tom Watson failed to make the putt on the 18th Green which would have sealed his 9th Major victory a discussion came about in my dwelling. A buddy of mine was not impressed with the feat of having a near 60-year-old man playing at a Championship level in a Major Tournament. That in itself is what makes the game of Golf a beauty.
Only in this sport is a senior's skill level become equivalent to a 25 or 30-year-old by way of course conditions. Watson's inability to close on the 18th hole does not take away from his accomplishments during this 138th British Open. He lead the tournament from Round 1 to the last hole, and let's go with that he choked. Yes, it sucks. He may not have this opportunity again...he hasn't won a PGA Tournament in 11 years (Mastercard Colonial, '98) and not won a Major in 26 years (Open Championship, '83). I am not included Senior(Championship) Tour wins, of which he has 12 since 1999 (5 majors & 7 regualar).
Tom Watson had the chance to elevate himself up the all-time Major Championships list, and it was said best on the ABC broadcast..."He has only himself to blame." In no other sport can a sixty-year-old need to blame himself for not winning the most difficult tournament played all year. If you can't recognize that greatness, your aptitute must be checked.
Done, BOOM.
- Aaron
p.s.
If Tiger didn't suck this weekend and Phil was playing, this post probably would not have been written.
Posted by Aaron Alamary at 2:09 PM 0 comments

So there is a lot of talk about the NL East and the weak play of its teams, especially the New York Mets...
To the outside fan looking in it may come as a surprise that a (Mets) payroll reaching just below the $150 million mark ($149,373,987) don't have some guys who are competent replacements if there starters went down to injury. Thanks to the injury bug the Mets have been dawdling through this season while Beltran, Delgado, and Reyes have all been lost for significant parts of this year. Not to mention their $6 million dollar bullpen upgrade in J.J. Putz has been far less than the what they hoped (1-4, 5.22, & on DL since June 6). And do I love the leaning on bad starters for quality starts nearly everytime out.
Now for a quick take on the Nationals, the team batting average is awesome .263, 4th best in the NL and the 2nd best OBP at .344. Too bad their league worst ERA 5.19 keeps them out of most ballgames from the start. I also heard the other day, their prized #1 draft pick Stephen Strasburg has not even been contacted by the club regarding a contract, Scott Boras needs to stick a cell phone up his ass.
The Atlanta Braves are somewhat of a jauggernaut. They went old with the bats this past offseason because they thought the pitching was there with Lowe, Vasquez, Jurrjens, Kawakami, & phenom Tommy Hanson as a mid-season call up. True to form the pitching is not Atlanta's issue, team ERA of 3.87 is 5th best in the NL. Problem is, Lowe has been inconsistent at best, and he was supposed to be their ace. Looks like the Braves are working towards 2010 already if you ask me, but you never know if another trade is in their works.
And now the Philadelphia Phillies. This team boggles my mind. So far 1 game under at home (22-23) and the Majors most wins on the road (27-15), after defeating the Florida Marlins down in Miami last night. Hitting, Hitting, Hittting, and not to much pitching has been their recipe for wins this year. Jamie Moyer has a 5.58 ERA, 9-6, but against the Florida Marlins 2.37, 2-1. He is the ultimate Marlins killer. I would rather face Johan, Greinke, Lincecum, Halladay, Haren, or Beckett than this guy if I had to win ONE game. For his career Jamie Moyer is 13-2, 2.83 in 15 career starts against the fish. Let's just hope Brad Lidge can't figure it out by season's end.
Finally, the Florida Marlins with probably the best team all around when everything is working. YEAH, I SAID IT. Nobody has a better starting rotation with Josh Johnson playing ACE. Nolasco, Miller, Volstad all have lights out stuff and each start gives them more seasoning. The bullpen is not an issue, as it hasn't been most of the year. Matt Lindstrom is a problem, but we look to the fact that he is still only in his 3rd Major League season, and first as the full-time closer. The major problems for the Marlins are Jeremy Hermida sucking 80% of the time and it seems we pay our guys to strike out. HANLEY RAMIREZ is more MVP than anyone but Pujols. I hope Uggla is gone soon, Hermida cut, Maybin brought up, and Gaby Sanchez given a chance.
LET'S GO FISH!!!!!!!!!!!!!!!!!!!!!!!!!!!!!!!!!!
Peace, for now until later.
- Aaron
Posted by Aaron Alamary at 11:27 AM 3 comments

That was a quote by me! POSTERS AVAILABLE UPON REQUEST...
Well since the fourth of July feast much has happened in the world of sport.
Le Tour de France has begun, and of course with little fanfare in America the beautiful! Lance Armstrong is cycling to win the tour after a three year hiatus. Not to mention he is a winner of the tour a record 7 consecutive years running from 1999-2005. For the most part Lance is back to "show the world" he can win amidst all the doping & p.e.d. speculation which encompasses his sport. Regardless, he is an amazing human being whose achievements must go down as Top 10 in all of sports history. If you've been in hiding and do not know already he is a testicular cancer survivor. If you have any decency in you...support his cause @ livestrong.com. I did back when those awesome yellow braclets first came out!!
Moving on, Roger Federer is better than Tiger Woods? Well, that debate remains in Tiger's hands, but at the moment Roger has the upper hand. Federer recently won his sixth Wimbledon Title, which elevated him into unprecedented territory with his 15th career grand slam championship. He surpassed legend Pete Sampras who sitting courtside offered thumbs up as Roger jumped in the air as he claimed the title. Back to the Tiger debate, the eras of both Federer & Woods have helped each guy achieve amazing success in their respective sports.
I am by no means a racist, but I do find it somewhat amusing that African-Americans dominate the country club sports of Golf and Women's Tennis. An all Williams' Wimbledon final had Serena take down sister Venus. Somewhere in their graves old white man are screeching. But, I love it, only if James Blake could start winning big!
The Major League Baseball All-Star game is in a couple days and my prediction for starting pitchers has probably fallen up short. Santana v. Halladay, hey both made their teams, but who couldn't pick those two! It should be a great one, now that the game has meant something for a couple years running.
Peace, for now until later.
- Aaron
Posted by Aaron Alamary at 1:22 AM 0 comments

Feast on the Fourth...America's Birthday 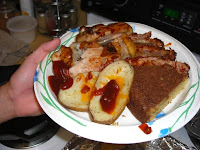 Me and some of my buddies will be making an extravagent feast for the birthday for this beloved country. On the menu will be a number of various dishes to satisfy my bountiful hunger. The night before will be the makin' of the desserts...Key Lime Pie & Layered Cake w/ cream cheese frosting...mmmmmmmm. http://www.facebook.com/album.php?aid=2825570&id=2029590&l=37228c2fd5
Check out the video here...http://www.youtube.com/watch?v=F65M0eicrUw
Happy Fourth of July to everyone...
- Aaron
Posted by Aaron Alamary at 9:33 PM 1 comments